As early as 1875 the Club decided on colours.  In those early days club members frequently played amongst themselves in various kinds of teams – Colonial Born vs Home Born, Ugly vs Handsome, Married vs Unmarried , for example.  But in 1875 Hamiltons had opponents and the opponents had colours.  Bishops wore dark blue jerseys – for practical reasons.  These boys played in shirts which were not very hardy and so some bright fellow decided to use the rough dark blue jerseys which workmen on ships used and in many cases still use.  Bishops had jerseys and so SACS decided to get jerseys as well.  They went off to Porter Hodgson’s in Adderley Street.  The only jerseys they had in stock – and in only two sizes – were those with blue and white hoops.  That’s how SACS, and subsequently Western Province, got their colours.  The Western Province jersey would develop a mystique, but in fact its unromantic ancestor was the only jersey design the shop had!

Hamiltons was far more systematic.  One must bear in mind that at that time there was a limited assortment of colours and materials available and coloured materials were brought from overseas.  That is why it was easiest to wear white and to dye garments a single colour.  In 1875 Hamiltons colours were white with a bright scarlet sash from the right shoulder to the waist with a Maltese cross on the left breast.  In 1878 the jersey was changed to white and scarlet hoops two inches wide.  In 1881 the jersey was changed to orange, black and scarlet bands, first about 2½ inches wide, then 3½ inches wide.  In 1894 the present jersey was introduced – three single broad bands of scarlet, black and orange.  In 1910, with the amalgamation with Sea Point, the jersey was again changed to red and black in four broad bands with a yellow Maltese cross on the left breast.  In 1914 the club went back to the 1894 jersey.

The Hamiltons playing uniform has not changed since 1914 – apart from a brief (and ugly) flirtation with collarless jerseys in the 1970s! – and it has also retained its distinctive, striped blazer.

The Wanderers Club in Johannesburg, founded in 1887 when Johannesburg was just a year old, took its colours from Hamiltons.  The first secretary of the Wanderers was Charles Llewellyn Andersson, who was knighted in 1922, a former Hamiltons captain.  He wrote to Cape Town for a supply of maroon jerseys, but the only jerseys the supplier had were Hamiltons jerseys.  Wanderers bought them and their colours have remained Hamiltons’ colours since. The Hamiltons Club in East London, founded in 1904, was, according to Ivor Difford’s history of South African rugby, named after the Green Point club.  According to Syd Loubscher of Border, it took its name from the Duke of Hamilton in Scotland, whose family home, set amongst the East Lothian woodlands, is Lennoxlove, dating back to the 14th century. 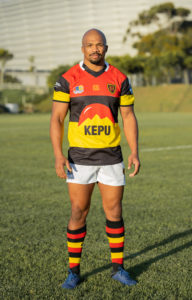