On the eve of this year’s Derby Day, on 29 May, our President, Dave Kagan, recounts the history behind the Derby.

With Hamiltons being established in 1875, and Villager in 1876, these two clubs represent the oldest clubs in South Africa.

The history between these clubs is therefore synonymous with the history of rugby and football clubs in South Africa and the Western Cape.

It has been built up on friendships, mutual respect and the unwavering belief in the value that rugby brings to the population of our country. Irrespective of the wins or losses, the history of the Hamilton Villager Derby Day continues, and will continue for as long as both clubs breathe and exist. When the teams run onto the field, the ghosts of players past don their respective kits and march into battle alongside them, rejoicing in the fact that they are not forgotten and live on through us.

The first two encounters took place on the Rondebosch Common in July 1876, with both matches resulting in 0 – 0 draws! Travel between the clubs was via horse-drawn carriage, train or tramway!

One of the greatest days in the history of both clubs, was the Jubilee match played at Newlands on 2 May 1925, attended by the Prince of Wales, later King Edward the VIII and then the Duke of Windsor. Hamiltons won 12 – 4.

With the advent of World War II, the clubs could not field even a first team and they duly combined for the duration of the hostilities, wearing the Hamilton jersey and the Villager shorts and socks. With the ending of the war in 1945, both clubs elected to part ways and re-enter the Union’s competitions under their own club names from 1946.

A report from 1945 reads: “We are proud to feel that the oldest clubs in the country have been able to stand together in times of need, and there is confidence that in future, the two will assist each other, wherever possible, to take once again, leading roles in the rugby world of the Western Cape.”

Hamiltons dominated the early years of the Western Province Rugby Football Union (since 1883) but the decade of 1976 to 1985 saw a period of Derby history largely dominated by Villager, although Hamiltons managed a 10 – 9 victory in 1982.

May both teams capture the spirit of the occasion and provide the rugby feast that this fixture so richly deserves.

“Friendships born on the field of athletic strife are the real gold of competition. Awards become corroded, friends gather no dust” –  Jessie Owens 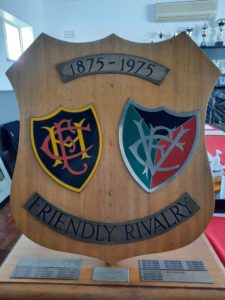